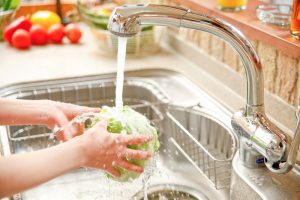 Homeowners may sometimes find themselves getting frustrated by a garbage disposal that keeps getting jammed up or the fact that they’ve had to call a plumber more than once to get something out of the mechanisms. Read on as we uncover some of the problems garbage disposals and kitchen sink drains face due to what people put down them.

Avoid Putting Anything Down That Isn’t Food!

Perhaps you envision your garbage disposal being something like a blender, with sharp blades that rotate around to chop up anything you need to dispose of before sending it down the drain. This isn’t quite right though.

Garbage disposals use motors that power impellers. At the end of an impeller, the “blades” aren’t actually sharp like that of a blender or food processor. In combination with a grind ring, the impeller blades use centrifugal force to break down smaller food items.

When we say hard foods, we’re referring to scraps like meat bones and fruit pits. Since your garbage disposal system grinds down food before sending it down the drain, it won’t be very effective on those types of materials. Think of it like this—if you’re not able to chew it with your teeth, it doesn’t belong in your garbage disposal.

Foods with a tough texture are rough on garbage disposals as well. Here, we’re talking about stringy, fibrous foods, like asparagus or celery. These can potentially get wrapped up around the motor and cause it to jam up. Anything papery will act like this in the disposal system too—things like onion skins and corn husks, or even too many eggshells or potato skins.

There are some food items that won’t hurt your garbage disposal system at all, but still shouldn’t be thrown down your kitchen sink drain. These include:

At Dalton Plumbing, Heating, Cooling, Electric and Fireplaces, Inc., your comfort is our promise! To set up an appointment, give us a call at the number above, email customerservice@daltonphc.com or schedule an appointment online.