4 Signs That You Need an Electrical Panel Replacement 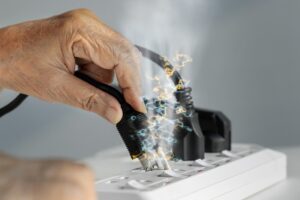 The electrical panel of your home, also known as the circuit breaker panel, is tasked with keeping your household’s entire electrical system running as safely and smoothly as possible. Chances are, you don’t think about your electrical panel that much, unless you have a serious electrical problem like a blackout or electrical fire—we sincerely hope this isn’t the case for you.

The fact of the matter is, however, is that today’s homes have far more electrical demands made of them than homes of the past, and yesterday’s electrical panels aren’t cut out for that much demand. Aging panels require care and attention to ensure that they’re operating as they should, but also so they aren’t threatening home safety. How do you know if your electrical panel is ready to call it quits and your home is asking for an upgrade? Here are 4 signs!

Once your electrical panel reaches a certain age, it will become more prone to damage from power surges through the wires, and will trip circuit breakers more often as a result. If your home, and therefore your electrical panel, is a few years old or even just a decade old, you likely don’t have to worry about this.

But any older than that and there’s a good chance your panel is really struggling to manage the amount of voltage going through it.

You might think that power surges are only caused by storms, but the truth is that they’re more often caused by large appliances, such as your HVAC system, cycling on and overloading your aging electrical panel.

So, if you find that your constantly resetting circuit breakers (we’re talking a few times a week) when in the past you’ve rarely had to do such a thing—maybe you were resetting a circuit breaker or two each year—then it’s a definite warning sign that your electrical panel needs help.

Circuits and wiring that wears down can create small electrical fires inside your electrical panel, which usually burn themselves out. But you’ll still notice the signs that they’ve occurred.

If you detect an acrid smell coming from the panel, or you see charring and discolored marking around the circuit breakers, then you’ve probably experienced an electrical fire. Electrical panels were designed in such a way to shut off circuits if this occurs, but continually allowing it to happen puts yourself and your family at risk.

Therefore, if you notice this sign, it’s time to give our team a call!

You might be able to resolve this by unplugging some appliances and redistributing where they’re plugged in within your home. But if you don’t have the ability to do this, or you do it and discover it didn’t resolve the issue, please give us a call.

Fuse boxes stopped having relevancy in the last 20-30 years. Fuses burn out, and homeowners have to replace them, which is timely, inconvenient, and not as safe as using a modern circuit breaker panel. If you’re still using a fuse box in your home, it’s definitely time to dial our number!

At Dalton Plumbing, Heating, Cooling, Electric and Fireplaces, Inc., your comfort is our promise! To set up an appointment, give us a call at the number above, email customerservice@daltonphc.com or schedule an appointment online with professional electricians in Cedar Rapids, IA.